I received this malware sample from a system administrator of a small technology firm. He had discovered the sample as an email attachment on his mail server. He was concerned because his malware defenses had not protected his users. Furthermore, his endpoint anti-virus solution did not identify the malware, even after decompressing and executing it on an isolated system. I agreed to take a closer look at the executable and report my findings.

The malware was received as a compressed email attachment, named “invoice.zip.” The ZIP archive contains a single 25KB executable named “BIR Form.exe.” Notice that the executable has the familiar Adobe Acrobat PDF icon. This is a common trojan ploy to tempt a user to double-click and execute the file.

The sanitized email headers show a few things of interest. The sender and recipient email addresses have the same domain. Since the email appears to have originated outside of the organization (confirmed by the sysadmin) then a proper SPF record would have prevented the malware from being accepted by the recipient mail server.

Executing the malware in a sandbox environment offers some strange results. The file, “BIR Form.exe” copies itself to the user’s temp folder as “budha.exe”, and executes that copy. Then it deletes “BIR Form.exe” and exits.

The copy executed from the user’s temp folder exhibits different behavior, A few DNS look-ups are made to domains “leechsurgery.com” and “jadhaogin.com.” Then, a constant stream of HTTPS requests are made to their corresponding IPs. The “budha.exe” process memory then continues to increase until its virtual memory is exhausted at which time the process crashes. The program never attempts to persist on the system, so the crash effectively ends the program. The user will need to extract the “BIR Form.exe” file and re-execute it for the trojan to retry. What is this executable trying to do?

Re-executing the trojan and taking a memory dump of “budha.exe” process with Process Explorer offers some clues. Using the strings utility against the dump shows a constant repeating pattern, part of which can be seen below.

It’s clear that the process is making HTTPS requests to a URL, and is copying the response to memory. The requested URL is the location of an executable called “photo.exe.” But, the server is sending 404 Not Found responses. It appears that the process cannot handle this in an elegant way, and the process memory balloons until it crashes. So, in order to help this along, we will need to find the payload that it is looking for.

Using IDA to disassemble the “BIR Form.exe” reveals that the executable is packed or obfuscated in some way. Very little of the file’s content is identified as executable code, and a very large section is identified as data. This can be seen clearly in the IDA navigation band.

The identified imported libraries belie the true nature of the trojan. No networking libraries are included, and several multimedia libraries are imported, which the executable never uses. It should be noted that the PEiD utility didn’t identify the packer.  So, we will need to manually unpack or decrypt the executable to find the original entry point, or “OEP” of the executable. The following techniques worked for me.

While quickly tracing the program using Immunity Debugger, I recognized when the behavior I observed during dynamic analysis began executing. As we had observed, the file makes a copy of itself, finds the user’s temp directory and appends the string “budha.exe” to the end of it. Scrolling through the debugger window also shows calls to HTTP and execution functions. The section of memory being executed starts with the familiar DOS header “MZ” at 0x00A20000. After “rewinding” the debugger by reverting to a VM snapshot, we can see where the executable is decrypting this new PE into memory. 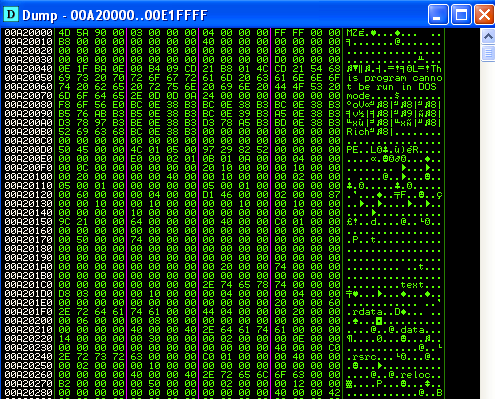 Now, we need to identify the point when the program makes a jump into this section. Shortly after the decryption function completes, we find a jump to address 0x00A21020, which falls within the section of code that we observed being decrypted.

After modifying the ImageBase, we can now open the file in IDA. The navigation band shows a large swath of code (in blue) and all of the sections are clear and readable. The imports section now correctly shows the calls that the executable will need, including HTTP requests and file operations.

Reviewing the newly disassembled PE corroborates what we discovered during dynamic analysis. The program is not complex. The program makes a copy of itself with the name “budha.exe” in the user’s temp directory and executes that copy. The original executable “BIR Form.exe” exits and the file is deleted. The “budha.exe” process recognizes that it is the second copy within the users temp directory and proceeds to attempt to download files from the “leechsurgery.com” and jadhaogin.com” domains over HTTPS using the user-agent “updates downloader”. The program then takes this file, copies it locally for execution before exiting.

The trojan downloader investigated here is not sophisticated. It uses simple obfuscation techniques (compression and encryption) to prevent detection. Aside from encryption, it employs no anti-reversing techniques. Since it is delivered as an email attachment, perhaps file size was the greatest concern for the developer.

2 thoughts to “Anatomy and Behavior of a Trojan Downloader”

This site uses Akismet to reduce spam. Learn how your comment data is processed.